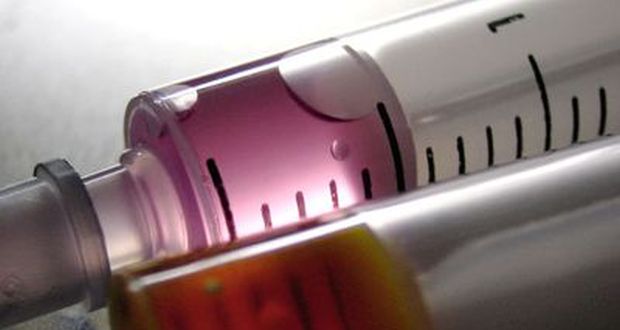 According to this article, methylmercury seems to cause behavioural changes by affecting the endocrine system, which controls the release of hormones in the body, an effect which in turn alters levels of the sex hormones testosterone and oestradiol in male ibises. He says that a parallel study, which will be published soon, shows that there are significant differences in endocrine expression between exposed birds and controls. “Mercury is a known endocrine disruptor, but this is the first study of endocrine disruption in birds,” adds Frederick.

The question arises whether ethyl-mercury in the preservative Thiomersal (or Thimerosal) present in some vaccines or also other vaccine ingredients could have a similar effect on baby boys. An Italian scientist believes that they do; needless to say, his views are controversial:

An Italian scientist is arguing that vaccinations produce homosexuality. 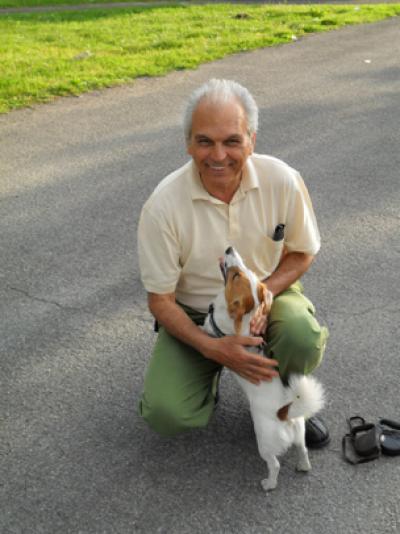 Here is a Huffington Post translation of the Vice interview:

The vaccine is introduced into the child, the child then grows and tries to find its own personality, and if this is inhibited by mercury or other substances present in the vaccine which enter the brain, the child becomes gay. The problem will especially be present in the next generations, because when gays have children, the children will carry along with them the DNA of their parent’s illness. Because homosexuality is a disease, even though the WHO has decided that it is not. Who cares! The reality is that it is so. Each vaccination produces homosexuality, because it prevents the formation of one’s personality. It is a microform of autism, if you will. You will see how many gays there will be in the next generation, it will be a disaster.

Despite these views, Vanoli insists he supports same-sex marriage and gay adoption. He doesn’t “blame” gay people for their “illness,” just as he wouldn’t blame someone who “suffers from cancer or a heart attack,” he told GayStarNews.

“But we have to say that it’s an illness, something that does not respect the order of life,” he told the outlet. “One of the main causes is represented by vaccines, which go against life, disturbing our mind and our spirit. The proof of that is the big increase in the number of homosexuals. Since mass vaccination began, this is the result.”

Here is a second article about Vanoli and his views:

Meet the scientist who claims ‘vaccines made you gay’

Gay Star News interviews Gian Paolo Vanoli, an Italian scientist and journalist who made the headlines in Italy for his theory

An Italian scientist and journalist is making the headlines in Italy for claiming that vaccines cause homosexuality.

He told GSN: ‘Being gay is a disease, but we have to love everyone, gays included, because it’s not their fault. The vaccines they had made them homosexuals.’

An Italian online magazine labelled him as a ‘grillino’ representative, a supporter and local politician of Beppe Grillo’s Movimento 5 Stelle, a new party that gained the 20% of the votes at the last elections.

Now, Vanoli denies this: ‘I’ve never had an official role in the party, I was a supporter but I’ve always said what I’m saying because these are my own ideas, nothing has been shared by the party.’

Gay Star News met Vanoli to find out what he thinks on homosexuality and to discover why he’s now so famous in Italy.

First of all, I have to say that I am in favor of gay marriage and adoption by LGBT people. In my life, I had a lot of gay friends.

I don’t blame them, as I don’t blame who suffers from cancer or heart attack. But we have to say that it’s an illness, something that does not respect the order of life.

One of the main causes is represented by vaccines, which go against life, disturbing our mind and our spirit.

The proof of that is the big increase in the number of homosexuals. Since mass vaccination began, this is the result. 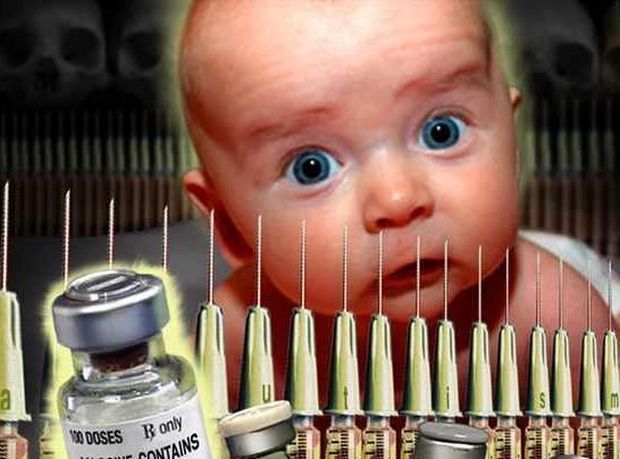 So, if homosexuality is an illness, we can try to find a cure to it…

In some cases we can find a cure, but sometimes the power of vaccines is too strong and they have destroyed the internal order for ever.

A cure must work on our mind, every illness is something coming from our brains. We can say that homosexuality is like autism.

Do you believe in God?

The official church, every church of every religion, is completely crazy. The God of Love exists, but it is not that of our priests.

I think that the Bible has always been misunderstood. I studied it and I can say that it was the first scientific book, it’s full of useful suggestions.

Don’t you think that saying that gays and lesbians are sick means stigmatizing them?

Homosexuality is, obviously, a deviance. But everyone is deviant, in a certain way. Nature is made of men and women, not of strange mixes.

Everyone is deviant, but the real challenge is understanding that everyone must be understood and tolerated and, why not, loved.

We have to change our society, we have to understand that humanity is going towards the depths of tragedy.

I know that gays are better than some straights, sometimes. Their embrace is warm and real.

Saying that, are you supporting your business? Do you make money from this?

No, absolutely. Often I have to pay to defend my ideas. I’m a naturopata, a scientist who does not believe in the official science.

At least one million Italians believe in what I do believe. In the past I had a company, working in the transport sector, I used to finance my ideas with the revenues.

But official doctors made me close the company, because they were against my ideas.

The Movimento 5 Stelle distanced itself from your remarks. What do you think?

They chased me away last week. I’ve never said that I was the official spokesman of the Lombardy’s section of the party.

But now it’s obvious to me: they are not ready to understand the truth of my ideas, so I’m not going to support that party again. 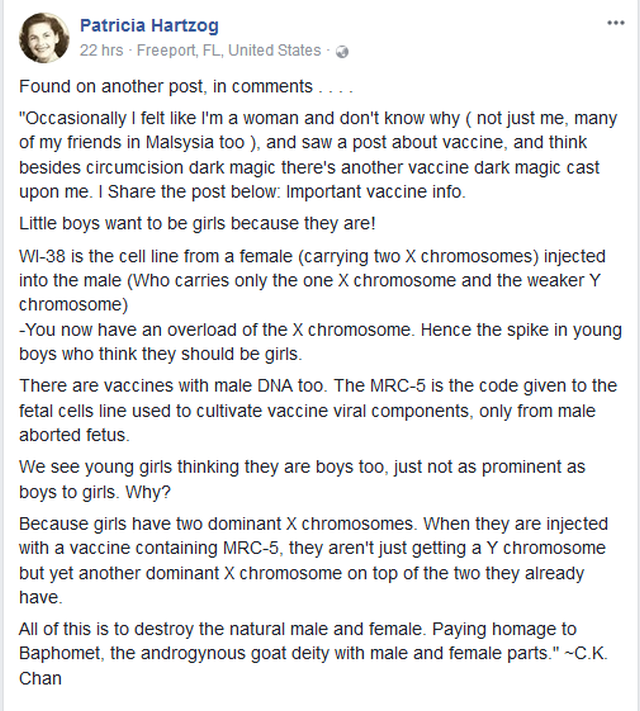 – Vaccination, Social Violence, and Criminality: The Medical Assault on the American Brain – by Harris Coulter

– Watch the bit starting at 1:50 about the effect of an insecticide on frogs’ sex hormones:

– Is Soy the Most Dangerous Food For Men?
http://www.menshealth.com/nutrition/soys-negative-effects

– How the Rockefellers Re-Engineered Women
https://www.henrymakow.com/001904.html 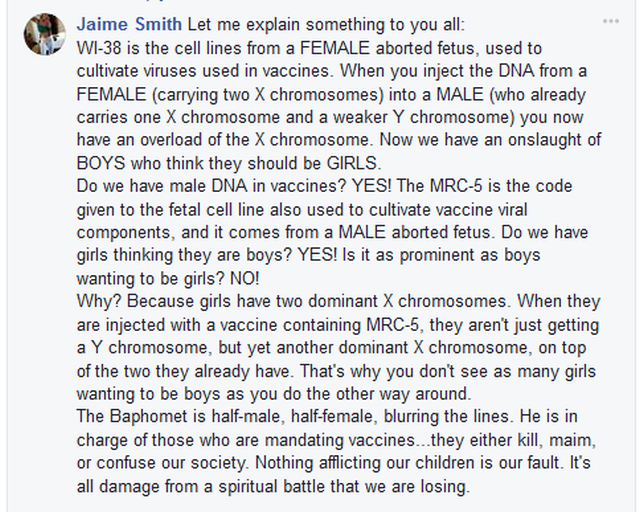 ———-
– DES: One of the Worst Pharmaceutical Disasters in History is Still Relevant Today
http://www.thevaccinereaction.org/2017/02/one-of-the-worst-pharmaceutical-disasters-in-history-is-still-relevant-today/

Excellent video! The bit relevant to the topic under discussion is from 29:45 to 31:12.

GREEN FIVE: How you've been massively HYPNOTIZED to delete reality from NaturalNews on Vimeo.

Vaccination Voodoo: What YOU Don't Know About Vaccines

What do ice cream and vaccines have in common?

From a medical doctor: Are vaccines a gift from God?