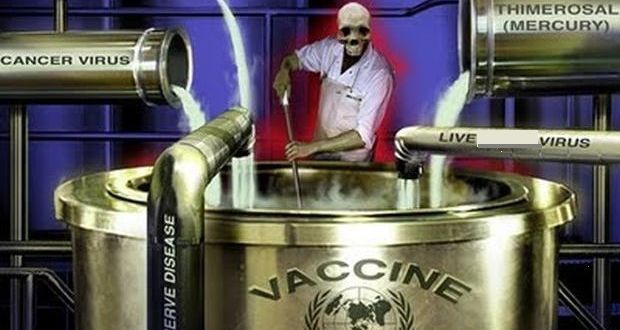 Vaccination has been promoted as a means of disease prevention for over 200 years, yet graphs based on official statistics clearly show that the introduction of vaccines did not contribute to the remarkable decline of infectious disease mortality over the past century, the decline having been mainly the result of improved living conditions.

The question arises whether Edward Jenner, who is regarded as the father of vaccination, had good intentions, or whether he was used by others to make the pollution of the human organism with animal protein socially acceptable, as this article seems to suggest. 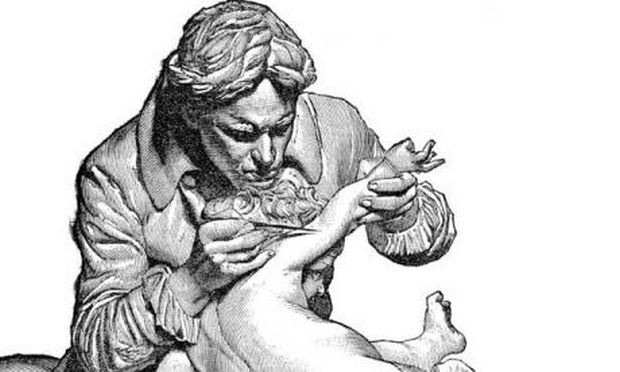 The word ‘inoculate’ originates from the early 15th century and means to “implant a bud into a plant,” from L. inoculatus, pp. of inoculare “graft in, implant,” from in- “in” + oculus “bud,” originally “eye”. SOURCE 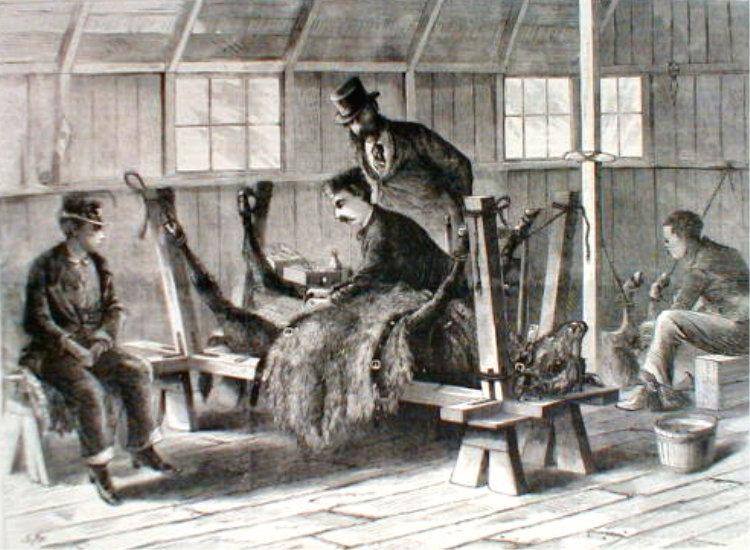 This cartoon illustrates smallpox vaccine opponents’ fears of being inoculated with animal protein: 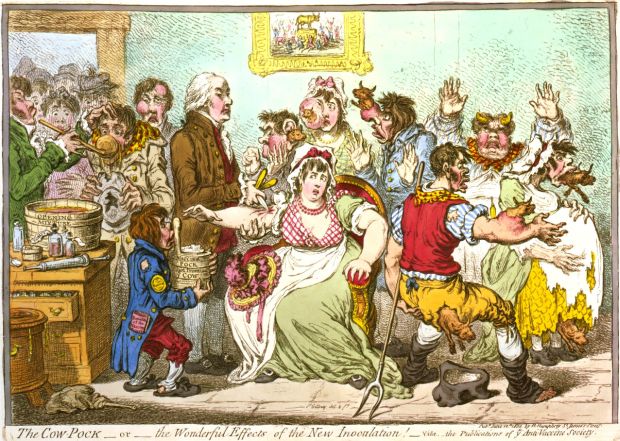 Modern vaccines introduce foreign protein from chick embryos, from calf fetuses, from monkey kidneys, from army caterpillars and from aborted human fetuses into our and/or our children’s organisms. 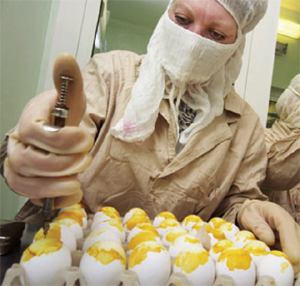 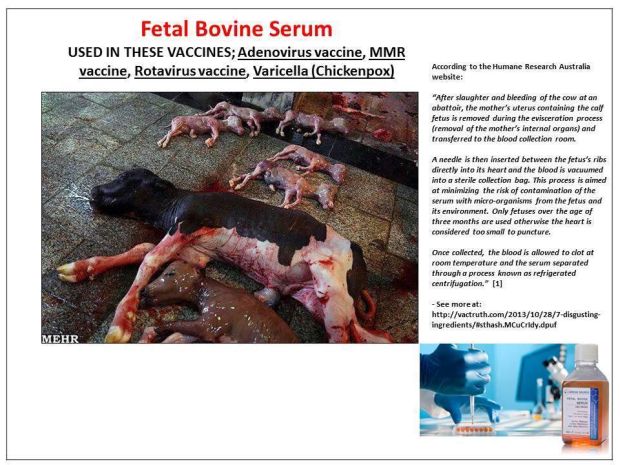 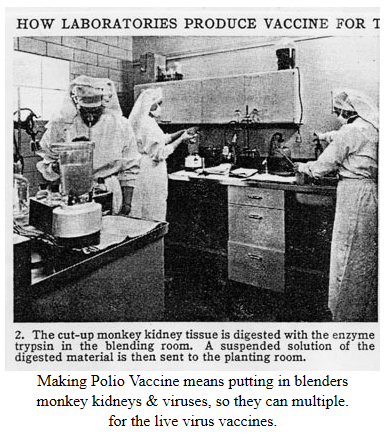 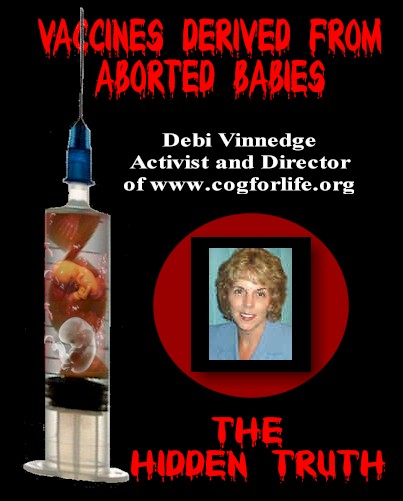 Vaccine Excipient & Media Summary
Excipients Included in U.S. Vaccines, by Vaccine
This table includes not only vaccine ingredients (e.g., adjuvants and preservatives), but also
substances used during the manufacturing process, including vaccine-production media, that are removed from the final product and present only in trace quantities.
http://www.cdc.gov/vaccines/pubs/pinkbook/downloads/appendices/b/excipient-table-2.pdf

Vaccination as a form of social engineering

In addition to their detrimental effect on health, vaccinations also influence social behaviour as described by Dr Harris L Coulter PhD in his book VACCINATION SOCIAL VIOLENCE AND CRIMINALITY – The Medical Assault on the American Brain.

Norwegian vaccine critic Ragnhild Madsen points to the findings of two studies which are of considerable interest in this context, the first study showing that independence respectively independent thinking is associated with increased amygdala activity, and the second study that maturational changes in amygdala volume and the binding capacity of DPN in the amygdala were significantly altered in infant macaques receiving the vaccine schedule. 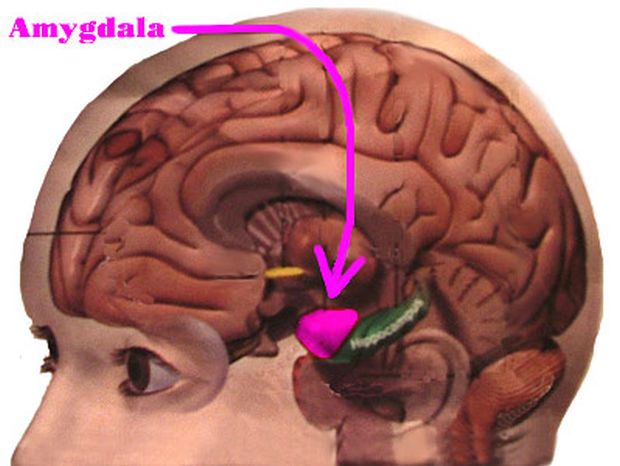 The question arises whether the detrimental effect on the brain and in particular the amygdala is accidental or intentional. If this quote by Bertrand Russell is anything to go by, it is planned and deliberate: 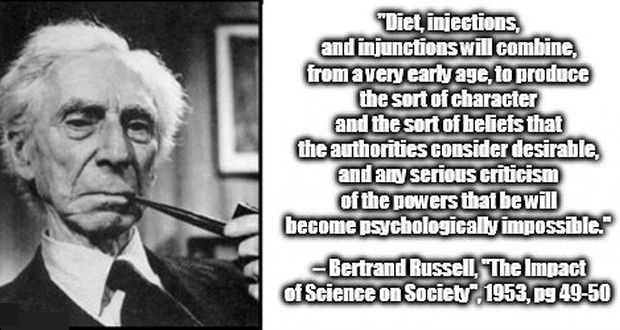 Also, why else would highly neurotoxic substances such as Thiomersal (49% ethyl mercury) and aluminium be added to vaccines? The claim that mercury is needed as a preservative for multidose vaccine vials or that aluminium is needed to elicit a vigorous immune lacks credibility, especially as the neurotoxic nature of mercury and aluminium is well known and well documented. The addition of these brain and nerve poisons makes sense only if their intended effect is to impair brain function and brain development, to promote the form of slavery the upper ruling classes consider “essential to maintain some measure of social order, peace, and tranquility”. This enables them to pursue their criminal activities and psychopathic agendas with impunity and without undue public scrutiny. The fact that babies’ and infants’ brains are being systematically damaged in the process not only appears to be of no concern to them, but is presumably their desired goal. 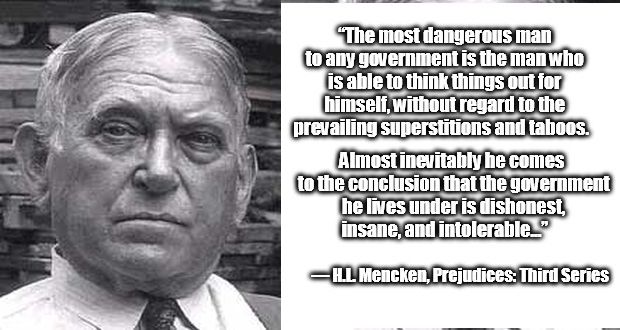 This excerpt from the document ‘Silent Weapons for Quiet Wars’ provides some relevant background to this matter:

“All science is merely a means to an end. The means is knowledge. The end is control. Beyond this remains only one issue: Who will be the beneficiary?

In 1954 this was the issue of primary concern. Although the so-called “moral issues” were raised, in view of the law of natural selection it was agreed that a nation or world of people who will not use their intelligence are no better than animals who do not have intelligence. Such people are beasts of burden and steaks on the table by choice and consent.

Consequently, in the interest of future world order, peace, and tranquillity, it was decided to privately wage a quiet war against the American public with an ultimate objective of permanently shifting the natural and social energy (wealth) of the undisciplined and irresponsible many into the hands of the self-disciplined, responsible, and worthy few.

In order to implement this objective, it was necessary to create, secure, and apply new weapons which, as it turned out, were a class of weapons so subtle and sophisticated in their principle of operation and public appearance as to earn for themselves the name “silent weapons.”

In conclusion, the objective of economic research, as conducted by the magnates of capital (banking) and the industries of commodities (goods) and services, is the establishment of an economy which is totally predictable and manipulatable.

In order to achieve a totally predictable economy, the low-class elements of society must be brought under total control, i.e., must be housebroken, trained, and assigned a yoke and long-term social duties from a very early age, before they have an opportunity to question the propriety of the matter. In order to achieve such conformity, the lower-class family unit must be disintegrated by a process of increasing preoccupation of the parents and the establishment of government-operated day-care centers for the occupationally orphaned children.

The quality of education given to the lower class must be of the poorest sort, so that the moat of ignorance isolating the inferior class from the superior class is and remains incomprehensible to the inferior class. With such an initial handicap, even bright lower class individuals have little if any hope of extricating themselves from their assigned lot in life. This form of slavery is essential to maintain some measure of social order, peace, and tranquillity for the ruling upper class.

Descriptive Introduction of the Silent Weapon

It makes no obvious explosive noises, causes no obvious physical or mental injuries, and does not obviously interfere with anyone’s daily social life.

Yet it makes an unmistakable “noise,” causes unmistakable physical and mental damage, and unmistakably interferes with the daily social life, i.e., unmistakable to a trained observer, one who knows what to look for.

The public cannot comprehend this weapon, and therefore cannot believe that they are being attacked and subdued by a weapon.

The public might instinctively feel that something is wrong, but that is because of the technical nature of the silent weapon, they cannot express their feeling in a rational way, or handle the problem with intelligence. Therefore, they do not know how to cry for help, and do not know how to associate with others to defend themselves against it.

When a silent weapon is applied gradually, the public adjusts/adapts to its presence and learns to tolerate its encroachment on their lives until the pressure (psychological via economic) becomes too great and they crack up.

Therefore, the silent weapon is a type of biological warfare. It attacks the vitality, options, and mobility of the individuals of a society by knowing, understanding, manipulating, and attacking their sources of natural and social energy, and their physical, mental, and emotional strengths and weaknesses.”

– How Mercury Destroys the Brain

– Autism, Vaccines, Mercury and the Culpability of the American Academy of Pediatrics

– The Covert Use of Science for Population Control

– Silent Weapons for a ’Quiet War’ 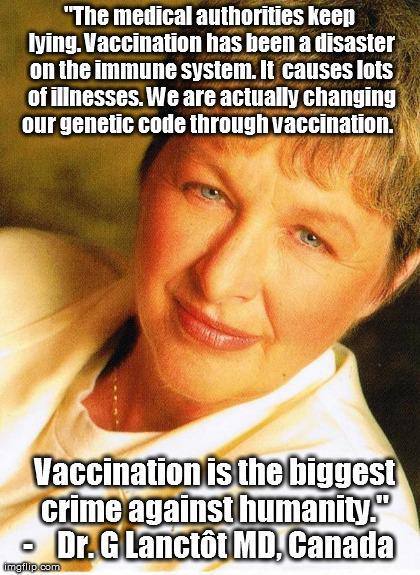 HPV Vaccination: Cancer Prevention or a Biological Disaster in Progress?