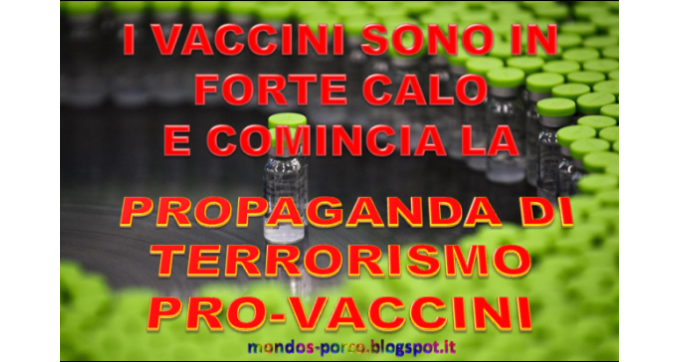 Featured image: “Vaccination rates are dropping and so the pro-vaccine propaganda terrorism begins”

On May 19, the Council of Ministers announced through an official press release the approval of legislation aimed at making 12 pediatric vaccines compulsory. In case of non-compliance with the obligation, the government will respond to the many families who express doubts and reservations about the safety of vaccination and are still awaiting clarification with the following measures :

– for children from 0 to 6 years old: exclusion from daycare

– for children between the ages of 6 and 16: the health authorities will inform the juvenile court which will decide on the parents’ parental responsibility (patria podestà).

– each year the family is not in compliance with the compulsory healthcare measure, a fine of up to
€ 7,500 will be imposed

At the same time, the Italian Medical Association has subjected two doctors to severe disciplinary measures for opposing mandatory vaccination citing the need for an accurate assessment of the medical history of each patient before subjecting them to medical treatment.

Many of the Italian citizens who are upset about this coercive measure will demonstrate on June 3 at the conference organized by Assis “Libertà di cura: una scelta europea” – “Freedom of Healing. A European Choice” in Florence. At this medical conference, university professors, epidemiologists, jurists will debate whether a future where medicine is ruled by imposed values and dogma which determines a single concept of care, within which it will no longer be possible for doctors or patients to choose approaches and avenues that differ from “those which have been officially admitted, allowed and approved.”

Another issue to be discussed is the conflict of interest in medical research and where health policies are decided. In the light of these facts, it seems worthy of note the news published by the authoritative Italian daily economic journal “Il Sole 24 ore” on April 13, 2016:
“GlaxoSmithKline (Gsk), the UK’s multinational pharmaceutical company, intends to make a substantial investment in Italy over the next four years in order to increase the groups revenues made in our country.”
http://www.sanita24.ilsole24ore.com/art/imprese-e-mercato/2016-04-13/vaccini-e-farmaci-glaxo-scommette-1-mld-italia-094838.php?uuid=ACzsSh6C&refresh_ce=%201

It is with great sadness that I announce that on April the 20th, 2017, one of our doctors, Roberto Gava, has been struck off by order of doctors of Trieste.

AsSIS, an association of doctors, lawyers, parents and free citizens working for a more human and customized medicine, wants to express its solidarity with and its appreciation of Dr Roberto Gava, a doctor known and
highly regarded for his skills and his professional and human commitment.

Dr Gava has been accused of being “anti-vax”. Such a statement is false and the related charge is entirely unfounded. In fact, only generic accusations have been made against Dr Gava: among the many public statements he has made, not a single statement has been specifically cited as an “anti-vax” statement, nor has it been taken into account that, as for the practice of vaccination, Dr Gava has refrained from recommending it when caution was needed for medical reasons and that, conversely, he has carried out vaccinations when medically required.

Moreover, Dr. Gava cannot be charged for any negligence, imprudence or incompetence in medical practice, nor for any misdiagnosis, danger or harm to any of his patients, or any behavior which is against the rules of transparency, honesty, dignity and decorum of the medical practice.

On a scientific level, he has always expressed his opinion on the basis of adequate documentation and independent, well grounded medical literature, presenting his positions, even when they were critical, according to a rational method and in a balanced, even way, respectful of any opposing points of view.

The only conclusion that can be reasonably drawn from this incident is that Dr Gava has been convicted only for his ideas, his opinions, and his personal, medical and scientific beliefs. For these reasons, AsSIS is extremely concerned by this verdict, which is surely not worthy of a society claiming to be civilized and unfit for
a democratic and constitutional system. The intolerable decision to strike off Dr Gava has betrayed the founding values of our Republic: freedom of thought, ideas, and personal beliefs, freedom of medical care and
medical-scientific research, freedom of expression, disclosure and information, freedom of choice regarding one’s own health, prohibition of indiscriminate mass medical treatments.

Because of the symbolic and emblematic value of this affair, our association has decided to act in all democratically legitimate, political, cultural, social, legal and judicial ways to clearly demonstrate our opposition to all forms of authoritarian actions of the sort that was carried out against Dr Gava. TODAY’s attack against Dr Gava is a hard blow against freedom: freedom for doctors to exercise their profession independently, for patients to choose their own healthcare, and for citizens to express their thoughts.

This association firmly believes that is now time to reassert, with personal conviction, strength and responsibility, the basic and constitutional value of respect for the individual, freedom, and the right to health of citizens. The respect for these fundamental rights can only be granted by a medical practice and doctors showing independent thinking and autonomy from interests other than medical ones. 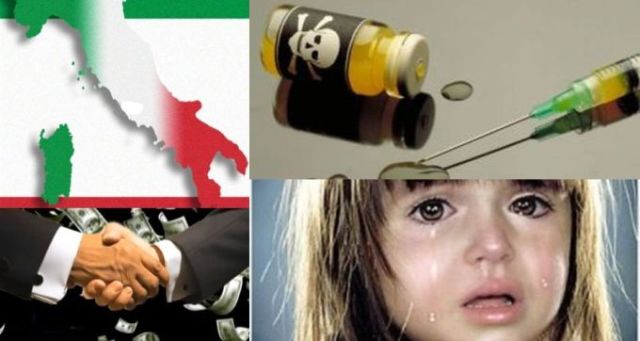 ITALY IS ERUPTING INTO MAJOR PROTESTS!

– Il cambiamento siamo noi – WE ARE THE CHANGE (great video in Italian and with English subtitles) https://www.facebook.com/ATTIVIAMOCITUTTI/videos/1612817872086058/?hc_location=ufi