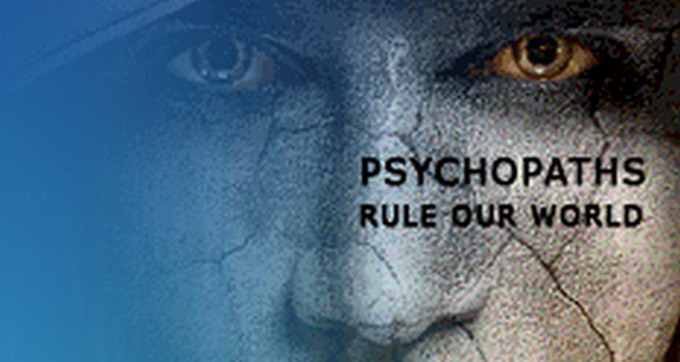 ‘As long as certain twisted souls feel the need to lie, cheat and murder to achieve their ends some of us need to keep pointing it out…….’ – Visible

In the USA, our current system of government is not working; not unusual, since there has never been a lasting system of governance that has worked. All ‘ocracies’ and ‘isms’ currently in place will in time be thrown upon the refuse pile, to join a heap of other failed systems throughout history. Why can’t we get it right? After thousands of years spent in refinement of dozens of systems, we are no closer to fair governance today than we were in the times of Sumeria.

The reason for this is simple. If we are to compare a Political System to a clock, we can envision that there are cogs, all turning in harmony, that produce a desired result. For a clock, the desired result is the correct time to be displayed. For a Political System, the goal would be to have a fair, transparent system constructed to maintain aspects of society that cannot be handled at a family level. Township, town, city, county, state, federal; all doing only what is required at that level, and no more. All levels would report to the people of problems, progress and major decisions.

The reason the Utopian vision just described can’t take place is that one of the cogs is not engineered correctly; one bad cog will render the entire system dysfunctional. If you were a baker, and had to make all of your bread from scratch, the first thing to do would be to get your ingredients together. You’ve made your bread, and when you tasted, knew something was wrong. What would you do first? Check the ingredients is what I would do. If one ingredient is bad, then it spoils the whole batch of dough.

We used to drain a person’s blood unto death for a head cold. (To much Iron in the blood!)

We used to think if you sailed far enough on the ocean, you would fall of the edge of the earth.

We used to think the sun revolved around the earth.

As a species, we’ve thought the silliest things, but we only know they are silly because the sciences have proven otherwise. In examination then, if the ‘ocracies’ and ‘isms’ that have been attempted over several millennia have all failed, then perhaps the problem lies in another direction?

When discussing systems of governance, the label is the ‘Political System’. The primary roles are filled by Politicians. It doesn’t matter how the system came into being; what does matter is that at some point in its evolutionary cycle, it becomes permeated with a group of people concerned with two things: Money and Power.

At a certain level, regardless of the initial intentions of anyone running for public office, the system in place either corrupts that person (if successful in his/her bid) or they do not function in that environment and they are run out or get out of politics. That’s because the system is populated with psychopaths, and you can only go so far in a psychopathic environment if you are not one. Get Hitchcock out of your head. Get Dianne Feinstein in. 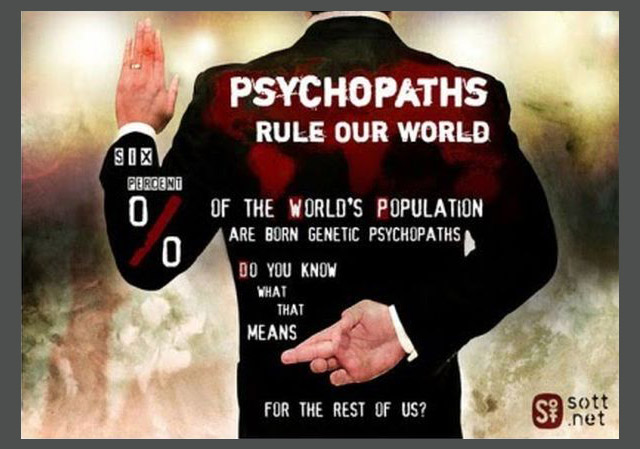 Science has made great leaps in mapping the human brain through the use of PET scans and the MRI machine. (1) We can now look at pictures of a brain and visually gauge levels of compassion and empathy found within. By studying thousands of these scans and cross-referencing them with the histories of the subjects scanned, irrefutable conclusions have been arrived at. Brains showing a lower than average development in the frontal cortex link to a patient history of psychopathic behavior. Studies indicate these diminished brain areas in individuals are markers for what we call psychopaths; manifestations of psychopaths include a lust for power and control, desire wealth and unearned respect and a marked lack compassion for others, or empathy.

At a certain political level, from second-term politician and up, as well, one must be a clinical psychopath to function and thrive.

Being a psychopath is not a choice, any more than contracting Polio would be. The point is, that psychopathy is an illness of the brain. Anyone can be a psychopath. Anyone can have the Parkinson’s time bomb ticking inside. No difference.

A brain showing psychopathic tendencies manifest a variant gene called the MAO-A gene, that has been linked to aggression, violence and low empathy. (2) The area of the brain lacking development in psychopaths is the ventromedial prefrontal cortex. This is displayed here: 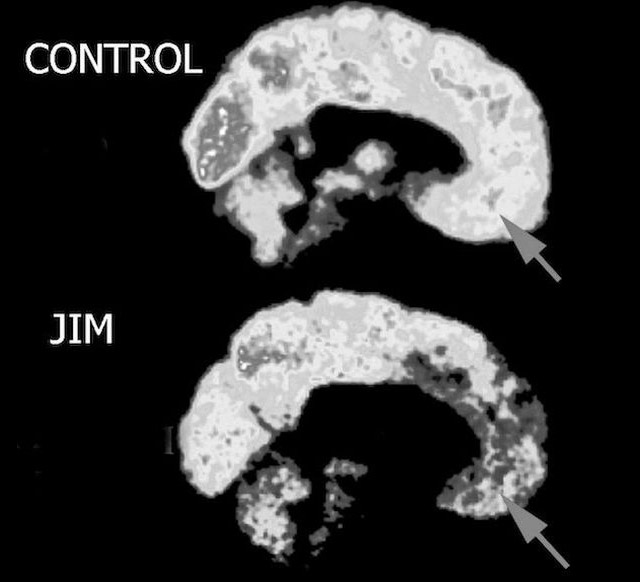 The arrow shows a healthy brain on top and the brain of a psychopath below. There is clearly a difference. There is a great deal of science supporting this from top universities and scientific institutions. Interestingly, though, the APA (American Psychiatric Association) does not list ‘psychopathy’ as a mental condition in its definitive manual DSM-V
, though they have ‘identified’ over 400 neuroses since climbing in bed with Big Pharma. The first thing a psychopath would do is squash any attempts to identify psychopathy in a medical diagnosis.

A psychologist from Stalinist Russia, Andrew M. Lobaczewski, was part of a team (the only one to make it out alive and be able to report their findings) that approximately 4% of the human population displays psychopathic markers. (3)

“….. a lust for power and control. They desire wealth and unearned respect. They lack compassion for others.” Does this line from above describe, more or less, what we’ve come to know as our average politician? Most, I believe, would find this to be an accurate reflection.

Many jobs require a physical prior to hiring. They can include a psychological profile as well. Any psychopath worth their salt can answer on paper what he or she knows is required for approval, so any written test should be dismissed as wholly unreliable. What is impossible to hide are the results of a PET scan. If a person has psychopathic tendencies, no amount of lies or coercion or blustering or threatening can alter the results. It’s there or it isn’t.

If a potential senator has a congenital heart defect or exhibits per-Alzheimer symptoms, that person would be ruled out as a potential candidate as being physically or mentally incapable of carrying out the duties of office.

What is needed is greater awareness of psychopathy and the prevalence of psychopathic persons in office. If, as it has been scientifically established, there is a genetic marker for psychopathy, then that condition should be a precursor to running for office, then we as a society would be able to ‘filter’ out the psychopaths, leaving room for mentally healthy, non-psychotic persons to function as administrators of the public trust.

If, as it is now, a person cannot hold office for a long list of physical conditions, both present and potential, then this condition, this genetic marker, should be placed on that list. There is no shame in it, any more than one can or should view Parkinson’s, or Lou Gehrig’s disease as a personal shortcoming or flaw.

This has a small chance for success, unfortunately. Who controls newspapers, television, Hollywood, Business, government and virtually every aspect of our existence to a lesser or greater degree? Psychopaths. The system is set up, designed, and maintained by them.

But, if you really want to test this theory out, (and watch a politician say no in a hundred different ways), ask one of them if they would be willing to submit to a PET scan to check for psychopathic markers. There will be no takers.

– The Parasitical Elite – Defining The Shifting Enemy Of The Common Man

No one in my experience has quite explained the nature of true Evil in the way Lobaczewski has. The information in this book is what I would call “high density” since the maximum amount of information is conveyed with a minimum amoumt of words. It’s not an easy read because of this but the information contained in this book precisely conveys the essential roots of the problem that humanity faces today.

Lobaczewski speaks of Evil in macrosocial terms, relating it to the word of politics and not from its ambiguous theological perspective. He bases his study of Evil in psycho-dynamical terms focusing on the behavioral dynamics of the psychopath and what motivates them. Lobaczewski studies the nature of Evil clinically, as it should be studied.

When I see the horrid state of the world in the terms Lobaczewski describes then everything fell in place for me. Now I know I’m not crazy. My reading of the book Ponerology explained A LOT to me, and not only confirms my own observations as to why the world is the way it is, but it has helped focus my perceptions and understanding of the nature of reality into a much greater clarity. It’s no small wonder why the manuscript of this book has been suppressed. Once reading it one will begin to see the naked emperor.

In this book I have learned that most, if not all of the governments of the world, have been taken over by a pathological infection from just a small group of psychopaths who understand the psychology of normal people to a very high degree and they have corrupted these governmental structures to the very core. These psychopaths have silently, but with mind boggling persistence and stealth moved in and taken over and hollowed out the very soul of humanity using lies and deception as their weapons of choice. These psychopaths, this inhuman race of pathological deviants, who do not have the capacity to feel conscience and feel the pain of another, now literally rule the world.

One psychopath can terrorize an entire town, even an entire city. The majority of normal people are now ruled by a minority of psychopaths and they have basically made our governments criminal networks. Criminal governments. Those working for these governments are now working for what basically is a criminal enterprise and they don’t see it because they are in it and profit by it, yet it is these people who are determining our future and the future of our children.

Mankind is becoming a willing slave to the pathocratic structures created by the inhuman obsessive greed of this small percentage of humanity that cannot feel conscience. This book is a MUST READ. Only by knowing what we are dealing with can we do anything about it without going in circles. We are dealing with an intelligent predator that feeds on the soul of humanity. It seems to me that there are only a very few who are now speaking of psychopathy and (macrosocial) Evil in the way Lobaczewski speaks of it, since it has been suppressed for so long, but knowledge of the behavior of these deviants, these snakes in suites, is essential so we can recognize this “predator within our midst” and then do something about it with any real and lasting results.

The Shocking Truth About Organ Donation