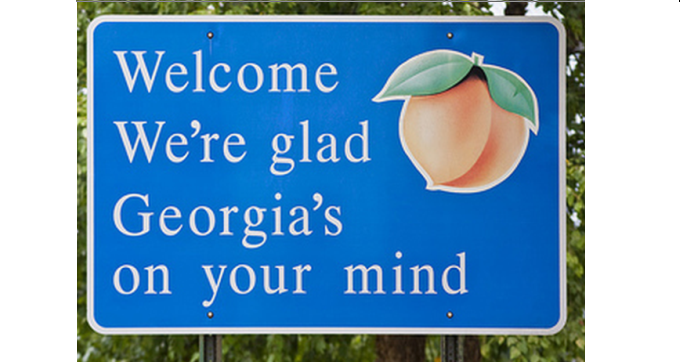 Hey I’m in Georgia and need some help. My kids are in private school with a religious exemption and the state is requiring that we now sign a standard affidavit drafted by the state’s attorneys, which we did but we crossed through everything we didn’t agree with and wrote in our own wording. They are now saying that we can’t do that and for it to be accepted, we have to sign it the way its worded or it’s not valid. The affidavit is of course not in OUR words, nor does it reflect OUR convictions. What can we do? Do you know a human rights lawyer in Atlanta you could recommend? I’m sick of this crap and I’ve had it with the government telling me what to do!!!!!!

Here is the relevant part of the form Mrs C is objecting to: 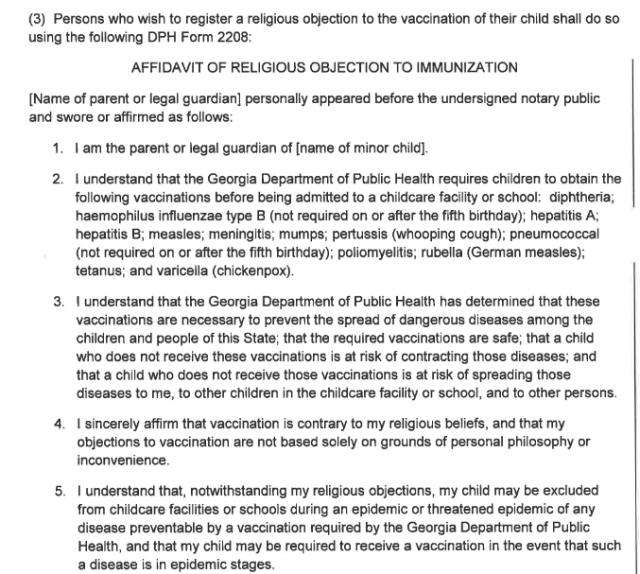 I checked the vaclib.org website for its information on vaccine exemptions in Georgia. Here are two excerpts:

“For a child to be exempt from immunizations on religious grounds, the parent or guardian must furnish the school/facility with a notarized affidavit stating that immunization conflicts with his or her religious beliefs… recently there is a push to use a state form that is improper from the standpoint of mixing the beliefs of a “health department” with the parent’s belief. Medical exemptions are also allowed.”

Join thousands of other pioneers in refuting the presumed authority the corporate government has over your life.
Break the presumptions by negating adhesion contracts. Find out if your state’s corporate statutes actually apply to you. Did you sign a contract binding you to adhere to their statutes? Not likely. To learn more, go to this page:

I sent an e-mail querying the above information to vaclib.org and received the following response:
———-

Hi Erwin,
Thanks for emailing us!
Really like your website and many of your posts.
Just so you know, I spent a LOT of time dealing with the GDPH ILLEGAL affidavit “form”.
As you no doubt realize, it is impossible to create a form out of a statute that specifies an affidavit.
We have all the detail here http://www.vaclib.org/exempt/georgia.htm#k-12

Frankly, it is up to the people in Georgia to challenge the illegal actions of Georgia’s Dept. of Public Health.
The five people I have been in contact with in Georgia are being cc.ed on this and will hopefully respond.

Just so you know, this is happening all over the country but no state that I know of has the term affidavit in their statute which is absolutely AWESOME for the people in Georgia if they want to take legal action. Colorado has put their Health Dept. on Judicial Notice and here in Idaho, we have finally made similar progress after 7 years…. since we caught them lying to the legislators claiming they are not requiring their form.

In the Spirit of Truth,

“Free Your Mind….
From the Vaccine Paradigm”

“When we give government the power
to make medical decisions for us, we, in
essence, accept that the state owns our bodies.”
~former U.S. Representative Ron Paul, MD

To begin your journey on learning about vaccines, the biomedical paradigm and why the only truly informed choice
regarding vaccines is complete avoidance and refusal, we offer you the following weblink to well-footnoted
articles and resources.
http://www.vaclib.org/intro/vaccination101.htm

Ingri’s e-mail included the following response to this topic from a parent:

I live in Decatur, GA (unincorporated Dekalb) and have one child in public middle school and one child in private elementary school. My children were previously home schooled. For my private school child, the school presented this form but said that I could submit my own affidavit if preferred. I then submitted my own personal, signed, notarized affidavit and have not had a problem.

For my public school child, I was able to submit my personal, notarized affidavit at the beginning of the year to register him. In December, I received a letter in the mail from the Dekalb County Board of Health requesting that I transfer my affidavit of religious objection to Form 2208. This letter threatened monetary fines and imprisonment for parents who do not comply.

I sent the following email to the Dekalb County Board of Health and sent copies to the Principal, Registrar, and the Dekalb County School District Legal Office. I also called the School District Legal Office and threatened legal action. I have not heard back from anyone, so I’m assuming they decided not to pursue the matter. If it had become an issue, I would consider suing, but we are moving out of state in a few months. Unfortunately, we’re moving to Illinois where we’re going to have to go through the same crap all over again.

I would recommend for parents to not engage in conversations with school nurses, registrars, etc. Just take the form and say you need to discuss it with your spouse and lawyer. Go home and then send a strongly worded email to as many people as possible. From what I’ve been hearing on Facebook, nurses and registrars are now being trained to instruct parents that they are not allowed to alter the form. Best of luck to all.

Here is a copy of the email I sent:

Dekalb County Board of Health

I recently received a letter from the Dekalb County Board of Health requesting that I transfer my affidavit of religious objection of vaccinations to Form 2208. This letter contains intimidating language, including threats of monetary fines and imprisonment for any parent or guardian who does not comply.

My son, XXXX XXXXXX, is a seventh grade student at Henderson Middle School. At the beginning of the school year, I submitted a notarized affidavit stating that my religious beliefs are in conflict with the Georgia DOE immunization requirements (see attached).

Since I have satisfied the Georgia state law and have a notarized affidavit on file with the school, I cannot in good conscience, sign their affidavit ‘form’ since it is not in my own words and I do not agree with the content.

Below is a link to the Georgia Department of Public Health’s own document where it states the following on page two:

I will contact my local state representative and let them know that the Georgia Department of Public Health is overstepping their authority with the public school. In the meantime, I am requesting that all threatening correspondence from the DCBH cease immediately.

Here is a copy of my original affidavit. Short, sweet, and to the point. Never discuss your religious beliefs with any school administrator.

To whom it may concern:

My religious beliefs conflict with the Georgia DOE Immunization requirements 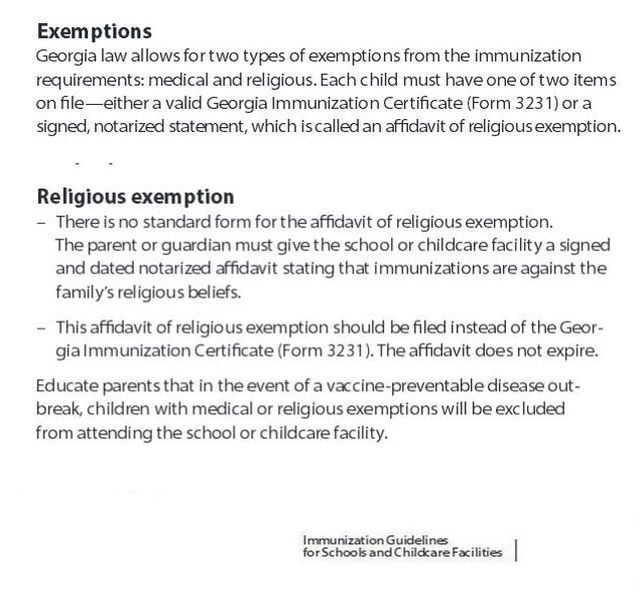 – Freedom of Choice an Innate Right, NOT a Privilege

Freedom of Choice an Innate Right, NOT a Privilege