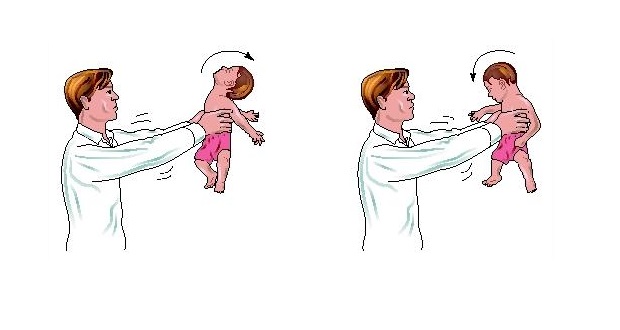 Medical Ignorance, Arrogance and Brutality A Danger To Babies

“Injury to mothers and their young is the basest form of cruelty. Tenderness is an emotion primarily designed by Nature to protect the defenceless; it is an emotion only experienced by many men when in the presence of women.”

From the introduction to ‘Childbirth Without Fear’ by Grantly Dick Read M.A. M.D.

Before you click play and watch the video below, we must warn you that the footage you will see is likely to shock and disgust you. The video feature a Venezuelan doctor who pummels and throws around a new baby like a rag doll while the parents watch, seemingly uninterested in the health and well-being of their baby. It makes one wonder if Big Pharma-funded medical schools churn out heartless doctors because in order to perform acts of cruelty such as injecting defenseless babies and children with highly toxic vaccines they have to switch off the humane part of themselves. 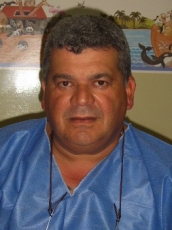 The doctor in question is reportedly set to be investigated by the Venezuelan Medical Association after a request by the President of the Venezuela Pediatric Society.

How heartbreaking to see parents watch and trust the doctor while their child cries and suffers due to the abuse he is inflicting. While this pediatrician is particularly brutal, pediatricians and other medical professionals in countries the world over routinely brutalise and traumatise babies and children every time they inject them with vaccines, causing unnecessary pain and suffering.

Parents understandably like to think of doctors as loving and caring people; this video shows that this is not necessarily the case. It makes one wonder whether the sadistic behaviour and brutality of medical professionals is the result of feeling trapped in a system in which profits are a priority and which demands of them that they switch off their feelings and intelligence in order to act as drug- and vaccine-pushers for the pharmaceutical industry.

Many doctors obviously try to do the best they can, but they are under enormous pressure to conform to the system and of course to pay their bills, including the considerable debts they may have incurred while going through medical school. When visiting a doctor, be aware that making money from consultation fees and commissions may be of a greater prority than your or your family’s health.

In response to questions about this incident, the vice president of the Medical Association of Zulia said that he had not received any complaints so far and – seemingly excusing this pediatrician’s behaviour – added that “everyone has their medical assessment technique”. HERE

Babies (as well as often also their mothers) are in many cases brutalised during childbirth by ignorant and arrogant birth attendants. 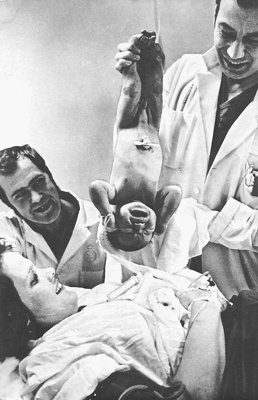 The above photo from Dr. Leboyer’s classic ‘Birth without violence’ shows a happy doctor displaying the baby to its smiling parents while holding it by its ankles, oblivious that this sudden unfurling of the spine is stressing the spine and hurting the baby. This is likely to cause serious back problems later in life. 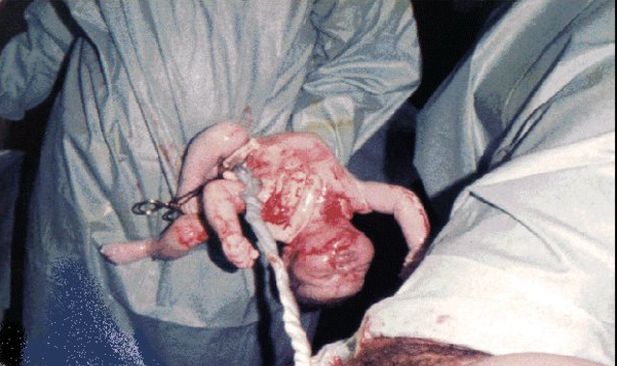 Not surprisingly, the baby shown in this photo did later suffer severe back problems. Here too, the doctor seems oblivious of the baby’s discomfort.

There is yet another atrocity evident in this picture:

This baby has just been born, yet the cord which is still engorged with blood has already been clamped. Such premature cord clamping is very detrimental to the baby and a monument to obstetricians’ ignorance and arrogance prevalent in their profession.

This baby should have been put face down on its mother’s front for her to hold. The birth attendant(s) should then have waited until the cord stops pulsating and goes flat and limp, or even better until the placenta has been delivered, before clamping and cutting it. This is called delayed cord clamping/cutting.

Some mothers choose to leave the placenta attached to the baby and let the cord drop off of its own accord when it dries off after about two days. This is called a Lotus Birth.