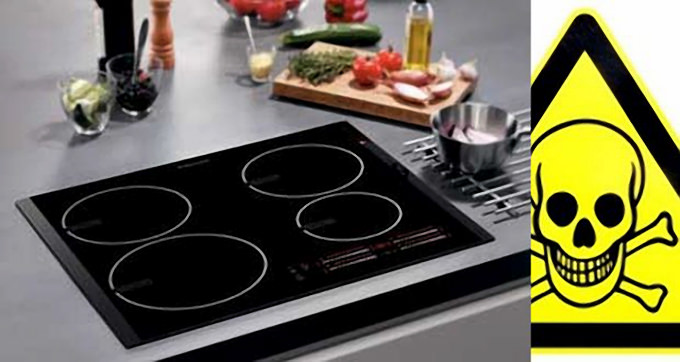 Thanks for this . It just goes to show, the telephone, computer, iPhone and IPad, smart meter, wireless (and INDUCTION COOKTOP which was not mentioned) companies and electrical experts all tell everybody such products are perfectly safe – yet now Lloyds insurance will not cover any Electro Magnetic Radiation health damage from them! So who is telling porkies?

All around me at present an army of stupid, silly women are doing up their kitchens or buying new houses and in the process installing INDUCTION HOBS to cook with, the most dangerous of all household EMF emitting devices in the world yet. The International Commission on Non-ionizing Radiation Protection (ICNIRP) sets guidelines for acceptable safety levels of EMF exposure (which are much too high anyway), but a study conducted in Switzerland in 2012 found that most of these induction hobs exceed these levels by as much as 16-fold!!!! – which is simply horrendous!!!!

While the old fashioned gas, electric and ceramic hobs all heat food by heating the pan or pot it is placed in. Induction hobs generate the heat in the pan by placing the pan in a massive electric field generated by a high-frequency electromagnet under the ceramic surface of the hob, and the bottom of the pan itself generates the heat that cooks the food. The top of the ceramic top remains cold. One must be very careful to use the correct type and size of pan for the field produced, because if you don’t the spill-over EMF field is massive. No woman who is about to become pregnant or is pregnant should ever use a Induction Hob, because when she stands in front of it, the greatest EMF radiation is directly in front of her stomach and reproductive organs.

Again, the leading paragons of the scientific and medical lunatic asylum remain absolutely silent. What a sham!