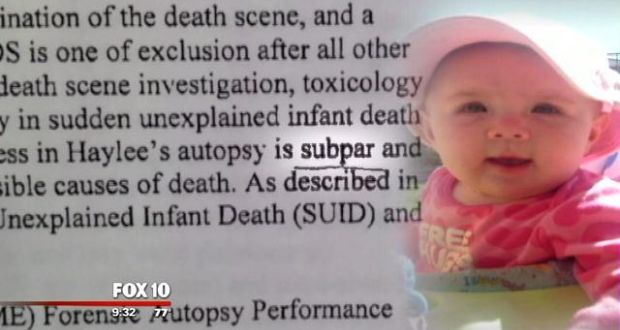 PHOENIX (KSAZ) — A 10-month-old girl died last May — a victim of Sudden Infant Death Syndrome — or so said investigators.

But did something else kill Haylee?

She received a Hepatitis-B vaccine just hours before she died, creating uncertainty her mother and grandmother couldn’t live with, so her family sought more answers.

“It’s the worst pain you could ever feel in your life losing your baby,” said Kallie Schmidt, Haylee’s mother.

“I was in awe.. how beautiful she was,” said Kallie.

“While we were on the telephone, she found Haylee,” said Debbie.

“I was in such shock.. I walked in and I didn’t know what to believe.. I didn’t even think she was gone,” said Kallie.

“I have never heard a scream like that before in my life and I never want to hear it again,” said Debbie.

An investigation by a county coroner said Haylee died of SIDS or Sudden Infant Death Syndrome.

“I got told it was SIDS. I got told that she died from a natural death,” said Kallie.

But Haylee’s family suspected something else was to blame.

Haylee had been given a vaccine earlier that day — a vaccine for Hepatitis B.

“It’s not right that five hours after a child gets vaccinated and they don’t wake up,” said Kallie.

But with only SIDS as an official explanation, Debbie suggested that she and her daughter seek out a medium. They wanted to hear from Haylee herself.

“I wanted some way to get in touch with her,” said Kallie.

Debra Martin is a Scottsdale medium.

“I am currently a level five certified medium with the Windbridge Institute,” she said.

They didn’t tell Martin anything about Haylee, but during their reading, Kallie said her daughter came through right away.

“She was like she has this blanket.. it’s light pink and she has it right now and she sleeps with it every night… at her funeral, that’s what I laid her with… the only person that could have known was my mom.”

Then speaking through Martin, Haylee described how she died.

“And Debra.. when she got to us, the first thing she said was..” said Debbie.

“Something was causing her throat to close up,” said Debra.

“I am having trouble breathing,” said Debbie.

“I kept having a hard time breathing,” said Debra.

“She said she felt sick and her throat was closing up and she couldn’t breathe anymore,” said Kallie.

And then Martin touched her arm.

“She went on to talk.. she felt it was a shot that she got an allergic reaction to something in her blood,” said Debbie.

“It was like a light bulb went on.. it was like oh my gosh.. your daughter is telling me it was a shot that killed her,” said Debra.

Debbie immediately decided they had to have answers.

“We hired a pathologist independently.”

And this is his report — Dr. Steven Rostad found that the thoroughness of Haylee’s autopsy was “sub par” and that the patient “did not show evidence of SIDS.” Instead, Haylee showed “features of a generalized allergic response most likely from the vaccination that was given earlier in the day.”

“His report showed that it was absolutely the shot,” said Debbie.

“Here is this little girl that really solved her own medical mystery,” said Debra.

“It is universally recommended for all children,” said Dr. Justin Wheeler, a chief resident at Phoenix Children’s Hospital. He is in no way connected to Haylee’s case, but he is familiar with the vaccine she received and the good it can do.

“The benefits greatly outweigh the risks in 99.9 percent of children,” he said.

“A lot of parents aren’t interested in giving their newborn a vaccination,” said Dr. Matthew Baral, who also is not connected to the case, but is a physician at the Southwest College of Naturopathic Medicine in Tempe.

“The chance of anaphylaxis from a vaccine is somewhere in the range of one out of 1.5 million, so it’s pretty rare,” he said.

But for now, Kallie and her mother want to spread the word.

“I was told it was safe and it wasn’t safe,” she said.

They want parents to consider the potential consequences of a vaccine they strongly believe killed Haylee.

I don’t want any other parents to go through the pain that I went through losing my daughter,” she said.

And they will always remember the little girl that was taken from them in the night.

“It really felt like she was an angel.. saving me and I didn’t even know it.”

The debate over the benefits of Hepatitis-B and other vaccines versus the risks has been going on for years now.

Help recognize that there are adverse reactions to vaccines

– 60 Things that Can Go Terribly Wrong with Hepatitis B Vaccination

– VINE UK Interview with Michael Belkin of ‘The Refusers’

– My son passed away after his shots – Alicia LeAnn Bohn

Laura Hayes: "Vaccines - what is there to be pro about?"

Sharyl Attkisson on Vaccines - Jon Rappoport
Gandhi on Smallpox and Other Contagious Diseases
Ebola: how to fake a pandemic
Gardasil News
Vaccination link to narcolepsy
Some Thoughts about the Social Programming in regard to Vaccination
Health is a non-medical condition
Are children becoming electronic media-addicted zombies?
Child Health and Caring for a Sick Child - Dr Lawrence Palevsky MD
Vaccination: Intent, Cause And Effect