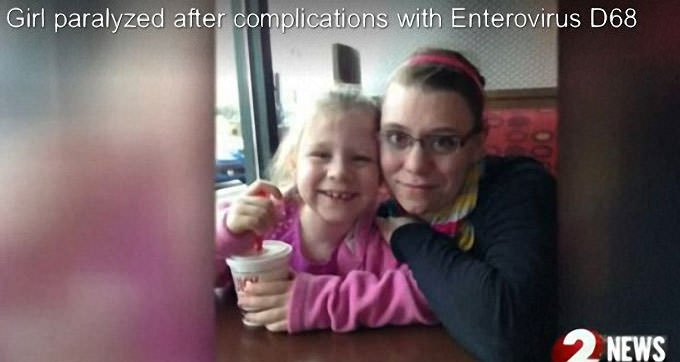 As Enterovirus D68 Deaths Increase, Are Vaccine Contaminants to Blame?

From mid-August to November 6, 2014, CDC or state public health laboratories have confirmed a total of 1,116 people in 47 states and the District of Columbia with respiratory illness caused by EV-D68.

According to the CDC’s latest statistics, EV-D68 has been detected in specimens from 11 patients who died and had samples submitted for testing. Almost all the confirmed cases this year of EV-D68 infection have been among children.

Deaths from this specific strain of enterovirus are rare, because this virus doesn’t usually cause a serious illness. The infection normally does not require hospitalization, and it seldom results in death. But this year, hundreds of children have required hospital treatment to preserve their lives.

Usual symptoms for EV-D68 include fever, runny nose, difficulty breathing, muscle aches, hypoxemia (low oxygen in the blood), and possible wheezing. Approximately two-thirds of confirmed EV-D68 patients had a previous medical history of asthma. Enteroviruses typically infect 10 to 15 million people annually in the late summer and early fall seasons, but the EV-D68 strain has led to more serious complications than the typical flu-like symptoms associated with the illness.

Some children with EV-D68 infection can also develop paralysis in their arms and legs. Enteroviruses usually reside in the digestive system. Respiratory symptoms occur when the virus infects the lungs and airways. If the virus is able to move into other tissues in the body such as nerves, then the infection can attack nerve cells in the spine that control movement. This exact scenario happened in 2012 when researchers at Stanford University reported 25 childhood cases of paralysis of an unknown cause that shared features with polio, and in some cases also started as a respiratory illness.