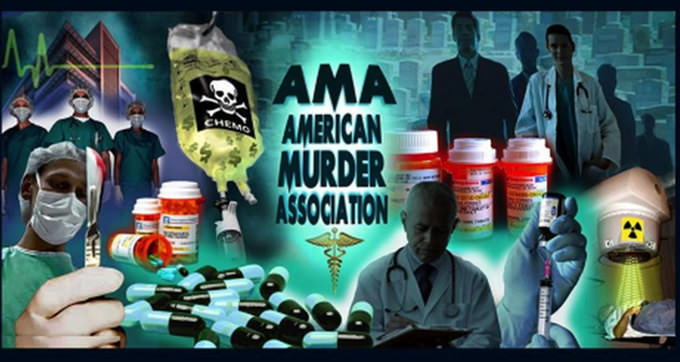 An Epidemic of Medical Rape

I was the two-week-old standing straight & shrieking in excruciating pain from “the worst case of the colic” (high pitched incessant encephalitic scream) my pediatrician had ever seen.

I was the toddler, bashing her head into the wall to try to relieve the burning heat, splitting pain, & pressure inside it – reacting violently towards myself & others.

I was the little girl, helplessly watching the light of awareness fading from her brother’s eyes after every round of vaccinations, as he “coincidentally” spiraled deeper into autism.

I was the little girl who at 7, hearing about the National Childhood Vaccine Injury Act over the radio – thought that didn’t sound like such a good thing.

I was the child who started suffering from what her grandmother said sounded like arthritis, as a little kid, was often short of breath, & told by a dismissive uncle she was “too little to have headaches”.

I was the child who at 8, lost a language & felt it slipping away.

I was the child – swollen & disfigured to the point I was unrecognizable for a month after getting shots for 4th grade, covered in weeping oozing hives – who was dismissed outright when I asked if it could have been because of the vaccines I’d recently gotten.

I was the girl who was told if she didn’t want vaccines, she would be held down as they were forcibly administered.

I was the young mother who decided I didn’t want that for my children – who had them forced over her objections & later under threat.

I was the young woman who’d always been dismissed & attacked for my questions.

I am the person who is furious at the pain I live with, the injustices that have been forced on myself & loved ones, & the chemical raping of my children, my brain & mind… feeling my mental acuity gradually slipping away like the loss of a language.

I’m the person trying to save people from doing this to their kids, & their kids from enduring it.

The term “brain-based inflammation” is an emotional trigger for me. I have lived with it much of my life & am literally hot-headed, always in varying degrees of pain… generally sporting ice packs, year-round.

My head hurts more often than not, & if it overheats, short-circuits ability to function.

You do know violating informed consent is kind of… #Rapey, right? 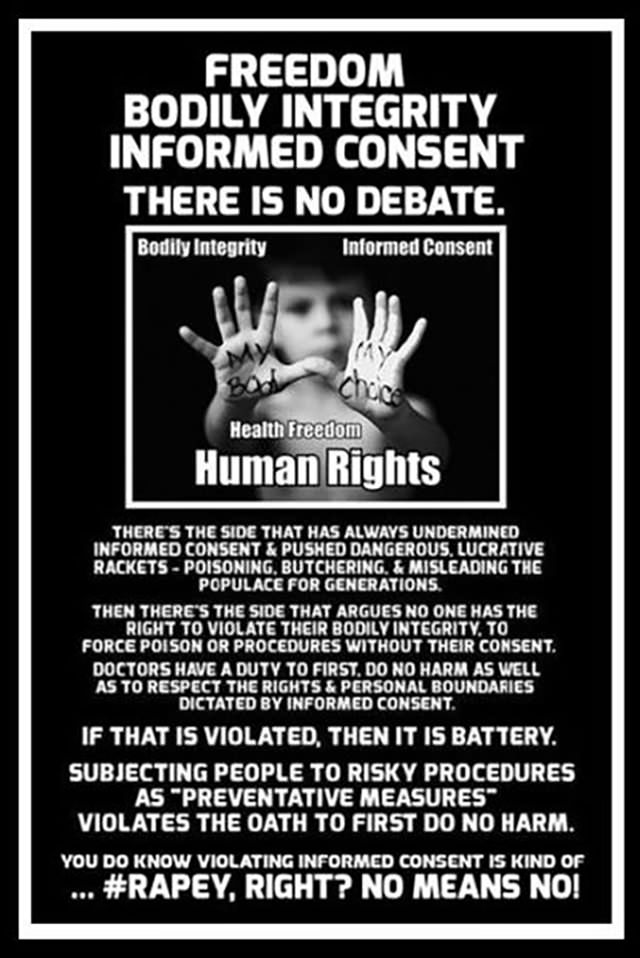 “Based on the belief that he had an obligation to give a fetus a chance for life, a judge in Washington, D.C., ordered a critically ill 27-year-old woman who was 26 weeks pregnant to undergo a cesarean section, which he understood might kill her. Neither the woman nor her baby survived.”
http://www.nytimes.com/2014/11/08/opinion/pregnant-and-no-civil-rights.html?smid=fb-share&_r=1

How this Dad said no
http://yournewswire.com/this-is-the-way-one-father-told-his-pediatrician-no-to-vaccines/

EXPOSED: 30 Tactics Health Officials Use to Get Innocent Parents To Vaccinate Their Children
http://www.fhfn.org/exposed-30-tactics-health-officials-use-to-get-innocent-parents-to-vaccinate-their-children/

Read Before Vaccinating: The 6 Principles of Informed Choice
http://pathwaystofamilywellness.org/Informed-Choice/read-before-vaccinating-the-6-principles-of-informed-choice.html#sthash.Llxbbc4U.dpuf
http://goo.gl/mlmVHS 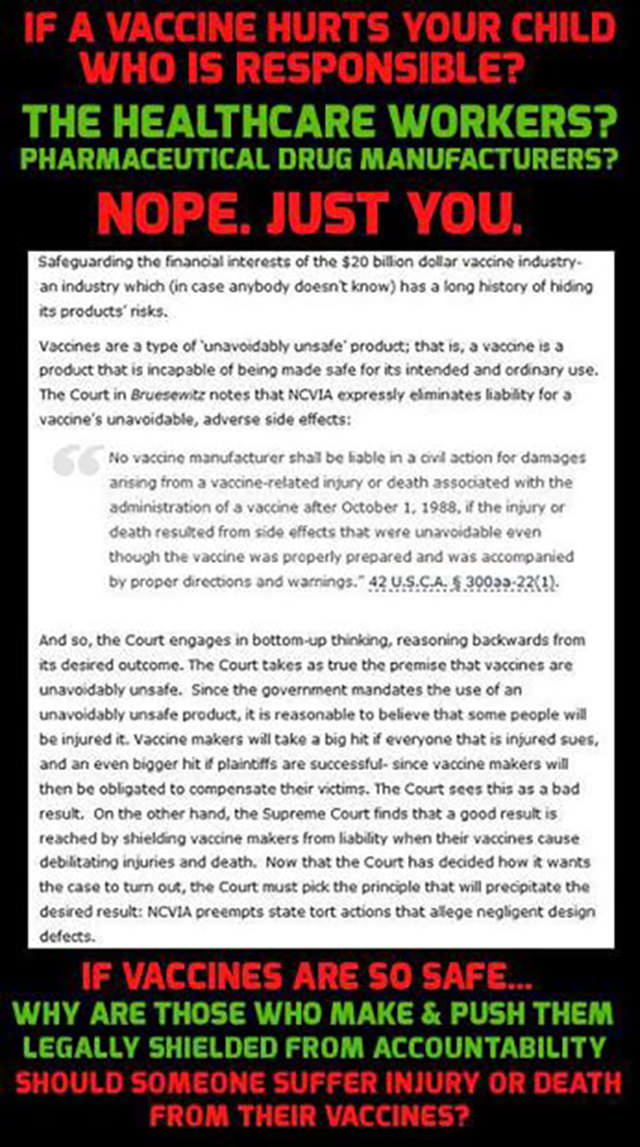 Who is held Accountable
http://goo.gl/hKLvpZ 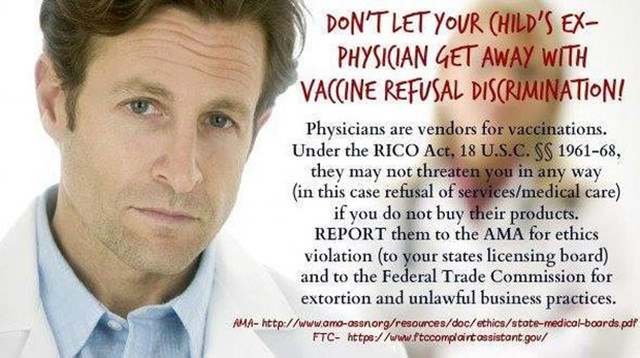 For those who assert Vaccines are safe
http://goo.gl/iZSKGV

In the best interests of the LabRats – Medically Kidnapped
http://goo.gl/RL6iLV 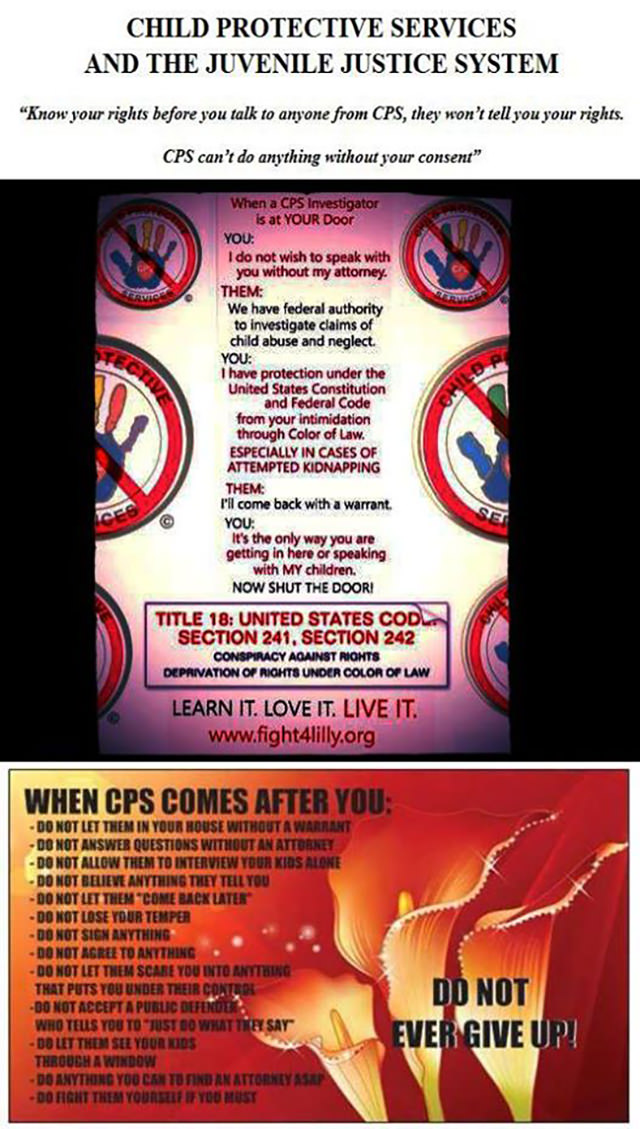 Peanut Allergy: Yet Another Vaccine-Related Epidemic?

Medical Ignorance, Arrogance and Brutality A Danger To Babies

Dr. Andrew Wakefield: If I had a baby now, I would not give them a vaccine
Smallpox vaccination destroyed my daughter's life
A Modern Day Witch Hunt in Australia
Thimerosal: Let the Science Speak - Robert F Kennedy Jnr
Premature Babies Are Knowingly Harmed Or Killed With Vaccines To Comply With Vaccination Schedule!
My Sons' Vaccine-Related Measles
India "polio-free" amid rise in acute flaccid paralysis cases
PROLONGED INFLUENZA - The New Epidemic
Mercury in Vaccines Associated with Premature Puberty
Treyton's Vaccine Reaction
7ads6x98y