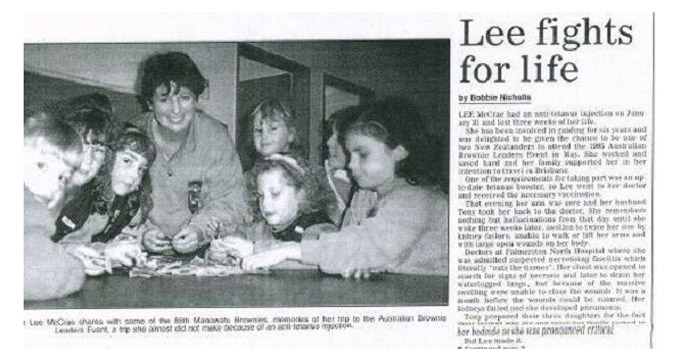 A Life-Threatening Reaction to the Tetanus Vaccine 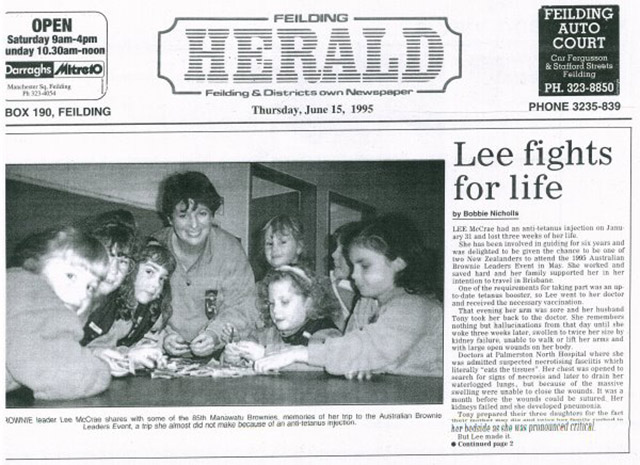 Lee McCrae had an anti-tetanus injection on January 31 and lost three weeks of her life.
She had been involved in guiding for six years and was delighted to be given a chance to be one of two New Zealanders to attend the 1995 Australian Brownie Leaders Event in May. She worked and saved hard and her family supported her in her intention to travel to Brisbane. One of the requirements for taking part was an up-to-date tetanus booster, so Lee went to her doctor and received the necessary vaccination.

That evening her arm was sore and her husband Tony took her back to the doctor. Lee remembers nothing but hallucinations from that day until she woke three weeks later, swollen to twice her size by kidney failure, unable to walk or lift her arms, and with large open wounds on her body.

Doctors at Palmerston North Hospital where she was admitted suspected necrotising fasciitis which literally “eats the tissues”. Her chest was opened to search for signs of necrosis and later to drain her waterlogged lungs, but because of the massive swelling were unable to close the wounds. It was a month before the wound could be sutured. Her kidneys failed and she developed pneumonia. Tony prepared their three daughters for the fact that their mother may die and twice her family rushed to her bedside as she was pronounced critical. But Lee made it.

Lee now on the road to recovery
Tony spent so much time in ICU he became well known to the nurses and doctors but when Lee returned with him recently to visit, she was back to her normal size and the staff did not recognise her.

Thanks to her own strength and the support of her husband, family, and a wide band of friends, she was home on March 10. She had a district nurse attend twice a day and a home help to do all the household tasks.
At first she sat in a chair all day but gradually she was able to walk further and do more and always the goal of Australia spurred her on.

Determined to attend ABLE, Lee attended Hydrotherapy and Physiotherapy at Palmerston North Hospital, always transported by her husband as she was unable to drive.
Friends, workmates at North Street School and guiding associates rallied around and the money was found for her trip. Throughout her illness, Tony’s employers, Scott Panels and Hardware, were totally supportive.
Still with only limited use of her right arm and easily tired, Lee travelled to Brisbane on May 19 for a week in Kindilan, the well equipped Queensland guiding centre.
Ït was the best thing I could have done for myself,”she said. Although it was physically very demanding and there was some things she was unable to do, like abseiling, she challenged herself to do as much as she could, and when she couldn’t, she learnt to ask for help.

She was humbled by the kindness of people both in New Zealand and at ABLE. One woman noticed that Lee was unable to write halfway through a talk, so copied her own notes from that point and gave them to her. Ëveryone was only too happy to assist me.”

She was able to visit Brownies and Gumnut Guides which is equivalent to our Pippies and came to appreciate the strength of the New Zealand Guiding movement.

Lee is left with limited use of her right arm and is still a long way from fit. She has started to drive again but is only able to lift a one pound weight with her right hand. The official diagnosis was streptococcal pyogenic myositis, but it will be later this month before the family will know whether ACC will accept her as there is no proof the infection was caused by the anti-tetanus vaccination.

In the meantime Tony McCrae has started a project to raise the $17,000 required for a special bed for Palmerston North ICU which would have made nursing Lee much easier. It is a small thank you for the time and care which went into nursing Lee through a long and traumatic illness.